Chrysler Is "Bringing The Power" For 2023 In New Teaser

Jump to Latest
EVFan
On September 13 Chrysler will reveal something involving power.
It could be the Airflow electric van or even the 300 Hellcat. 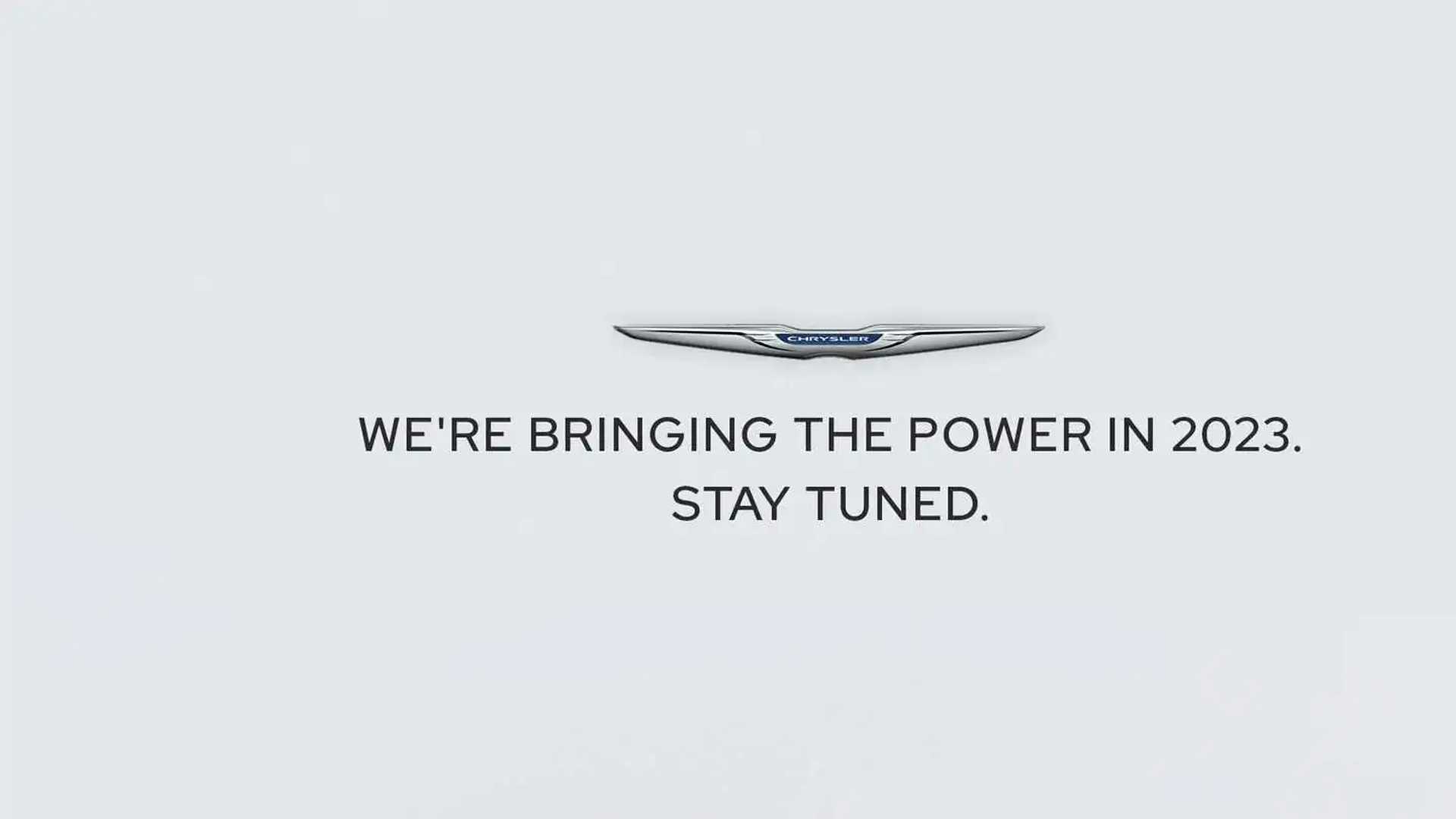 Chrysler Is "Bringing The Power" For 2023 In New Teaser [UPDATE]

www.motor1.com
Update: We still don't know the nature of the power that Chrysler is talking about, but we do know the automaker has a press conference slated for September 13, ahead of the Detroit Auto Show. A vehicle unveiling is scheduled to take place during the press conference, and it's specifically called a special-edition Chrysler vehicle.

We're just over a week away from media days at the 2022 North American International Detroit Auto Show. Does Chrysler have a surprise waiting in the wings? A new teaser from the automaker suggests something involving power is indeed right around the corner.

Chrysler posted a simple teaser image to social media, proclaiming that the company is "bringing the power in 2023" with a request to stay tuned. Ordinarily, we'd chalk this up to an announcement regarding the Chrysler Airflow concept EV, but it may not be as simple as that.

To refresh your memory, the Chrysler Airflow concept debuted at the beginning of 2022 during the Consumer Electronics Show. Billed as a four-door crossover riding on Stellantis' STLA platform, Chrysler listed an estimated range of between 350 and 400 miles. An updated version of the concept debuted in April, wearing a black exterior with minor visual changes. Two electric motors drive front and rear wheels for all-wheel drive, with an estimated power output of around 400 combined horsepower.

The Airflow is expected to go on sale in 2025, breaking ground as Chrysler's first EV. Before that can happen, however, we need to see the production version. That could certainly be the power mentioned in Chrysler's teaser, though particular attention is drawn to the year 2023. It could mean the production version will be unveiled in 2023, and that's a wholly viable argument.

But, we also know the folks at Dodge are spending 2023 engaged in a massive celebration of all things Hemi. It's the final year of production for the enduring Charger and Challenger with big V8 engines, and there's been a long-running wish among Chrysler 300 fans to see the big luxury sedan finally get a Hellcat V8 of its own.

The comments of the embedded Facebook post above are filled with such desires, and once upon a time, there was an SRT version of the 300. Could Chrysler be planning one last internal combustion hurrah in the same manner as its sibling brand Dodge? A Chrysler 300 SRT Hellcat would certainly bring the power in 2023.

The case is made stronger by Chrysler's media announcement for a "special-edition Chrysler" unveiling, taking place the evening of September 13 in Detroit. Again, that's a rather specific turn of phrase that suggests we aren't looking at something completely new, and as such, not electric. This is also taking place the day before Ford's big seventh-generation Mustang debut. Theoretically, if one wanted to steal some muscle car spotlight from the Mustang, going live with a Hellcat-powered Chrysler 300 would be a pretty good way to do it.

At this time, we have just this teaser and Chrysler's media announcement to go by. We will certainly keep an eye open for more teasers, but we should have full disclosure one way or another in a little over a week. In the meantime, check out Dodge's take on future performance in the Rambling About Cars podcast, available below.

Written By:
EVFan
Follow View All Authors
0 Replies
1 - 1 of 1 Posts
About this Article
0 likes
0 Replies
Written By: