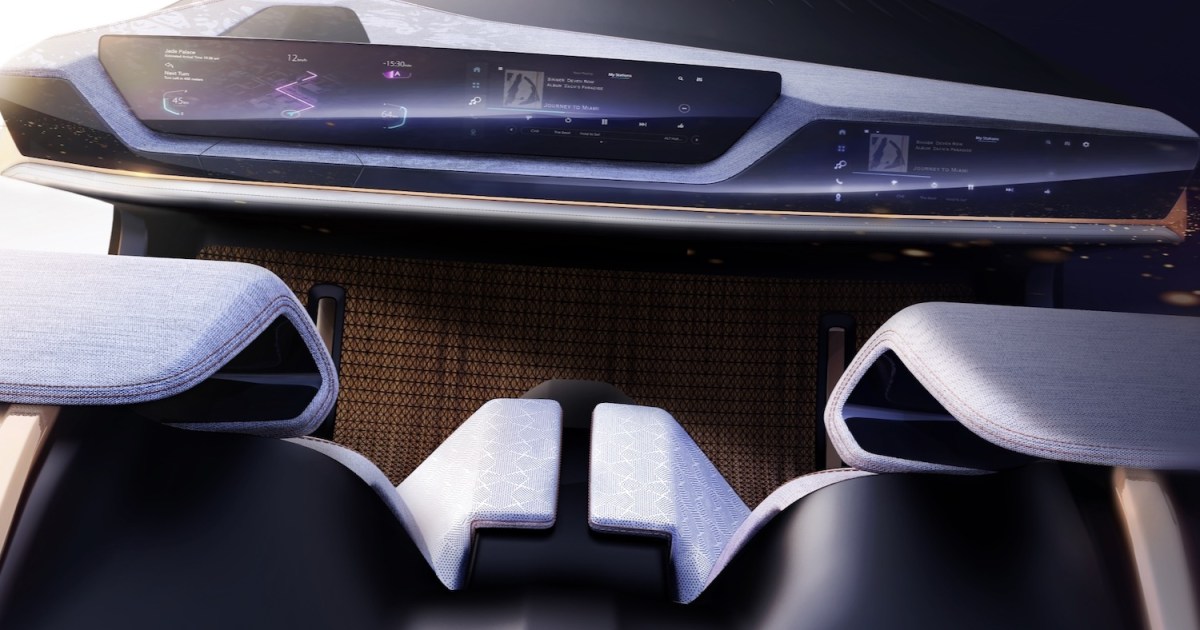 The Chrysler Synthesis demonstrator previews a new generation of infotainment systems for the automaker's upcoming EVs.

Unveiled at CES 2023, the Chrysler Synthesis demonstrator is a mock-up of what the automaker claims is its vehicle cockpit of the future. Featuring a vast expanse of screens and smart software, it sets expectations as Chrysler prepares to revamp its aging lineup in the coming years with a fleet of EVs.

The two-seat cockpit demonstrator is dominated by two dashboard screens. One reaches nearly across the dashboard, while a second smaller screen is nestled into the passenger’s side corner of the dash. While front-passenger screens are already available on vehicles like the Jeep Grand Cherokee, from Chrysler’s fellow Stellantis brand, this is a more stylish application that makes it seem like the entire dashboard is one big screen, measuring 37.2 inches.

Behind the screens are three software platforms: STLA Smart Cockpit, STLA Brain, and STLA AutoDrive. STLA Smart Cockpit handles the displays, while STLA Brain enables underlying features like over-the-air (OTA) updates and a virtual assistant that can sync the car with a driver’s phone or smart home devices, as well as recommend parking and EV charging options or handle e-commerce transactions.

STLA AutoDrive is a driver-assist system that will allow drivers to take their hands off the wheel and their eyes off the road in certain situations, Chrysler claims. When engaged, the Synthesis cockpit reconfigures to let drivers do other tasks — such as videoconferencing or karaoke — that wouldn’t be advisable without a high level of automation.

Before setting out, the car welcomes its driver using biometric authentication, and can then set up a trip plan based on personal schedules, weather, and the car’s state of charge.

The physical cockpit demonstrator is based on the Chrysler Airflow concept, an electric SUV unveiled at CES 2022. Chrysler claims it was made with 100% sustainable materials, with all plastics derived from post-industrial sources or recovered from oceans.

This high-tech cockpit doesn’t correspond to a specific production car, however. The Airflow is still just a concept vehicle, and Chrysler was vague on how close the Synthesis layout is to being production-ready. Chrysler will be the first Stellantis brand to use the STLA Smart Cockpit, STLA Brain, and STLA AutoDrive tech platforms in North America, but they might appear in a different wrapper than what we’re seeing here. Chrysler has a habit of making bug CES announcements that don’t lead anywhere, going back to 2017’s Portal concept.

Chrysler plans to launch its first EV in 2025 and go all-electric in 2028. That’s not a difficult task considering that, with the imminent discontinuation of the 300 sedan, the only Chryslers left will be the Pacifica and fleet-only Voyager minivans.
1 - 1 of 1 Posts
About this Discussion
0 Replies
1 Participant
Last post:
EvenFlow 25 d ago
Chrysler Airflow EV
2023+ Chrysler Airflow Community and Owner's Club - Join the conversation about the new Chrysler Airflow electric SUV
Full Forum Listing
Explore Our Forums
Chrysler Airflow EV General Discussion Forum